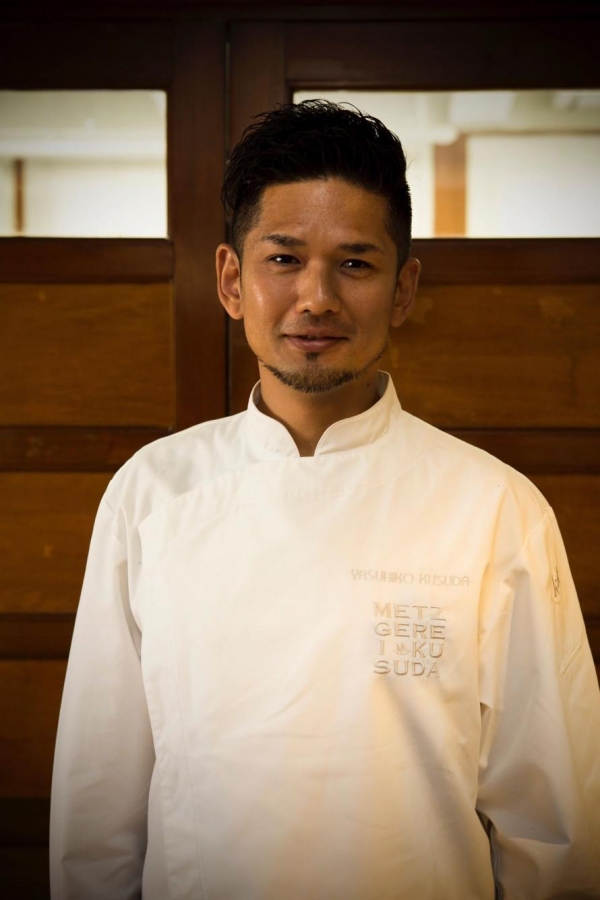 Born in 1972 in Hyogo, Yasuhiko Kusuda moved to Kagoshima Prefecture when his father set up a ham business and assisted his father from a young age. He studied Italian and French cooking in Kansai. After the Great Hanshin Earthquake, Kusuda worked as a chef at the Kobe restaurant Rote Rose. In 1996, he moved to Europe, where he began training in Germany and France. From 2000, he worked as the head of Kusuda Ham Factory in Kagoshima, moving to Kobe in 2004 to open METZGEREI KUSUDA Rokkomichi. He opened another branch in Ashiya in 2009. In 2013, he was invited to appear as a special contestant at Jeunes Espoirs et des Chefs Charcutiers Traiteurs, a contest in France to determine the best charcutier (French-style pork butcher). In January 2015, Kusuda along with Yusuke Takada of La Cime represented Japan in the “International Catering Cup”, winning top prize in the seafood category. In November 2015, he won Cooking Masters, a cooking award by Japan’s Ministry of Agriculture, Forestry and Fisheries. In May 2016, he was selected as a judge for the World Paté-Croûte Championship Asia Final. In September 2016, his charcuterie was included in The Wonder 500, a selection of the best local products in Japan by the Ministry of Economy, Trade and Industry’s Cool Japan initiative. Since 2020, he has served as cooking supervisor at à table, a restaurant at the Kyu Karuizawa Kikyo, Curio Collection by Hilton. In 2021, he became a director of the Association de la Charcuterie Française au Japon.