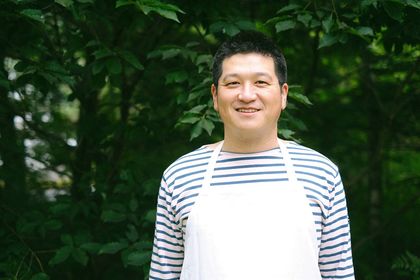 Born in 1980 in the village of Hakuba, Kita-Azumi District, Nagano Prefecture, Tetsuo Ota’s time studying in Italy at the age of nineteen inspired him to begin his culinary career. After training in Japan, he further accumulated culinary experiences for a total of eleven years, working for both regular and top-class restaurants such as El Bulli in Spain and Astrid y Gastón in Peru, along with serving as a private chef for celebrities. Later, in the South American Amazon, which he visited to learn about its local food culture, he encountered a village that cultivates criollo cacao without using pesticides. He then started his own fair-trade business that buys cacao directly from the producers and distributes it to chefs in Japan and abroad. He wrote a book about his past experiences and a documentary about his journey to the Amazon was released on DVD. In August 2019, he opened his own laboratory and restaurant, LA CASA DI Tetsuo Ota, in Karuizawa, Nagano Prefecture. He is currently involved in a wide range of activities, including cooking with local ingredients from Nagano, promoting cacao produced in the Amazon, and providing consulting for corporations on their products.