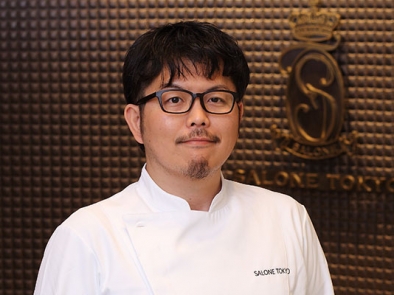 Born in 1976 in Tokyo, Takahiro Higuchi embarked upon his vocation as a chef after graduating high school. In 2002, he moved to Italy. He then spent three years training in Sicily at such restaurants as Bye Bye Blues (Palermo) and Al Fogher (Piazza Armerina). In 2006, he became chef at RISTORANTE SICILIANO (Ginza) and then one of the two chefs at SALONE2007 in 2007. In 2010, Higuchi became chef at IL TEATRINO DA SALONE (Minami-Aoyama). In 2011, he stepped down as chef to take up a position as overall head of cooking at all the SALONE GROUP restaurants. In 2013, he co-developed a low-water pasta fresca with Fushicho Karasu, the “charismatic noodle master” of Asakusa Kaikaro, and later became involved in developing pasta flour. In 2016, he was appointed chef at the newly opened L’ottocento (Nihonbashi) and then executive chef at SALONE TOKYO (Hibiya) in 2018. He continues to serve as overall group head chef.